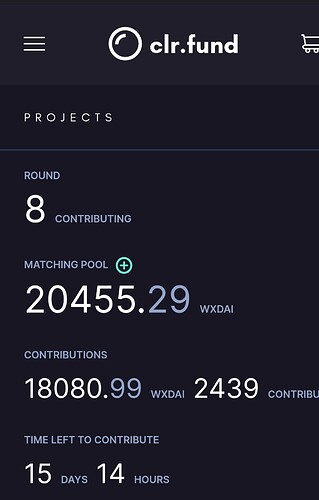 With a little over two weeks to go in round 8, we’re already more than 4x our previous all-time high in number of contributors.

But is it a little too good?..

Do we have a Sybil problem this round?

I have a suspicion that some of this round’s volume is users attempting to farm airdrops. That being the case, it’s logical that some users would attempt to create multiple accounts.
To be clear, there is no CLRFund airdrop and CLRFund’s design makes it impossible for recipient projects to know who their contributors are and reward them with airdrops. So CLRFund will be a fruitless airdrop farm.

What are the best tools we could use to assess and identify patterns of Sybils and collision in the round?

I see three potential layers that could be analyzed.

Does anyone have suggestions on who might be the right person to tackle 1?

2 and 3 will necessarily need to be performed by the BrightID node operators and CLRFund’s coordinator, respectively, and 3 should probably only happen as a last resort if 1 and/or 2 indicate something fishy.

I don’t think there is any need to worry about these problems.

I’m not really worried about people attempting to farm airdrops on clr.fund. Since users can’t prove who they voted for and clrfund is not doing an airdrop. What I am worried about is Sybil attacks negatively impacting the outcome of the round.